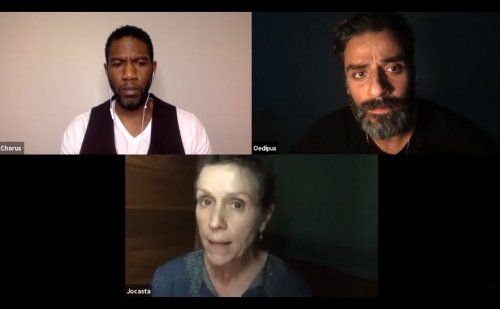 The Oedipus Project at SNF online

A dramatic reading of Sophocles’ Oedipus the King as a catalyst for powerful, guided conversations about the impact of the COVID-19 pandemic.

The Oedipus Project is an innovative digital initiative by Theater of War Productions that presents acclaimed actors performing scenes from Sophocles’ Oedipus the King as a catalyst for powerful, healing online conversations about the impact of the COVID-19 pandemic upon diverse communities throughout the world. Sophocles’ ancient play, written and performed in 429 BC during the time of a plague that killed one-third of the Athenian population, is a timeless story of arrogant leadership, ignored prophecy, and a pestilence that ravages the city of Thebes. At the time the play was first performed, the audience would have been reeling in the wake of a pestilence and its economic, political, and social aftermath. Seen through this lens Oedipus the King appears to have been a powerful public health tool for helping Athenians communalize the trauma of the plague, through a story that is as relevant now as it was in its own time.

A participatory audience discussion, framed by community panelists remarks, guided by Bryan Doerries will follow the readings from Oedipus the King.

To be part of the discussion registration is required to this Zoom event. Click here to register. The event Zoom link will be distributed and available to registered attendees starting 2 days prior to the event, on June 22nd.

SuperTitles.gr work on this project, was the live subtitles feed of both SNFestival video stream and the Zoom webinar where the performance was taking place.