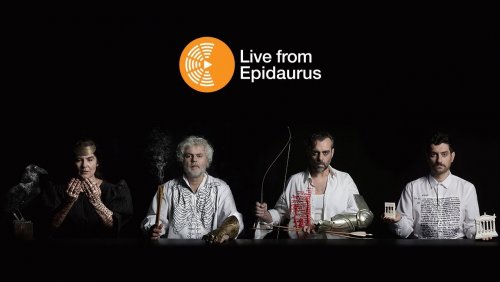 The Persians by Aeschylus at Online streaming

For the first time ever, an ancient Greek drama performance will be streamed live, from the ancient theater of Epidaurus, often called “the world’s most beautiful theater.”

Within the framework of this year’s Festival, the National Theatre of Greece with the support of the Greek Ministry of Culture and Sports will present to a global audience a production of Aeschylus’ drama The Persians, commemorating the 25th centennial of the Battle of Salamis. It is the first time that a major ancient Greek drama production is being livestreamed, and it is also the first time that any event is being livestreamed from Epidaurus.

The play will be streamed live at 21.00 Athens time (GMT 3).
The stream will be hosted online at livefromepidaurus.gr, via youtube, and it will be available worldwide except Greece.

Supertitles.gr's contribution to this event has to do not only with the surtitles live projection at the venue, but also with the simultaneous english subtitles feed to the live video streaming on youtube.